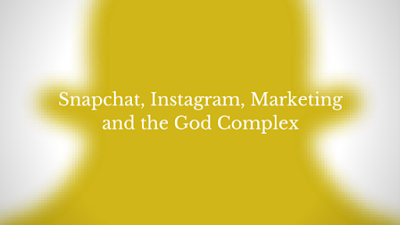 Have you ever heard of a concept called The God Complex? Basically, at it's core it's a way of thinking that allows for blanket methodologies to be applied to whole fields and concepts. Tim Harford sums it up really well in a TED Talk that he gave on the subject - the story being how one man, Archie Cochrane, managed to convince the prison guards at a Nazi PoW camp that by by changing the medication, he could cure and prevent a horrible disease afflicting prisoners on the camp.

How did he do this? By trial and error - something that some in social media are scared to admit pays dividends on new networks.

Take this article in Forbes, for example, where contributor Mark Fidelman argues that there is little value in using the network for marketing purposes yet. Respectfully, I think he completely misses the point.

He describes Snapchat as a ‘deficient, substandard social app’. Let me pick up on that first point. Good social networks and apps are built with their audience in mind at first - not marketers. You can’t see the benefit of it? Well, shucks, that’s your bad - 200 million active users do. And they’re on there, chatting away and keeping an eye on what savvy and relevant brands are up to. So whilst it may be deficient to you, I’m afraid that you might just have to suck it up and take part.

He then complains that, like Instagram (400 million users), Snapchat is ‘hard to convert’ on, and that there are no simple means to to move someone off the platform into a purchase cycle. That is ridiculous. Firstly, he makes the assumption that this is the only reason brands use Snapchat and Instagram. This is content marketing 101. You lead with what’s valuable to the end user, and create goodwill. The conversion may not happen on Snapchat, or Instagram - but it may happen somewhere along the line. If you’re marketing is integrated, then that person might be following you on other platforms. They might see your product posted elsewhere. They might see your product in a shop or on Amazon, and then purchase it there. They may even Google your product and then visit the site through there. Good social media is part of a marketing mix, not the be-all and end-all. Have you asked your audience how they make their purchasing decisions? Maybe you should - you might be surprised.

He also complains (I swear this is trolling), that it’s difficult to get new followers, and have people following you. I refer him back to my previous point - have you integrated Snapchat into your company’s marketing mix? Are you thinking of it’s unique place within that eco-system? Why not use those platforms to make your audience aware that you’re on that network? Here’s an example - my Snapchat.

Why don’t you give me a follow for lots of fun updates and nonsense?

Every social media platform is different, and should be treated as such. Benchmarking a relatively new network against older platforms with more traction is a prime example of The God Complex - a complete unwillingness to experiment, to use trial and error, to be willing to take a chance. The complete opposite of the mentality Archie Cochrane set out to challenge.

I would wager that the person who wrote this article has set out to achieve what they wanted from it - namely to generate some controversy, and some business by appearing to be a straight-talking social media pragmatist. But he should be careful. Fortune favours the brave. Not being brave enough to test the waters on a network is at best naive, and at worst colossally arrogant.

I feel it’s important to highlight this. I feel that sometimes we social marketers are too quick to apply a blanket ‘A vs B’ approach to analysing different networks, and deliberately overlook the nuances of a network to try and appear as if they have a universal metric for all networks of this kind - which is like prescribing paracetamol for every ailment and injury under the sun.

I’m afraid, in this case, Mark Fidelman has got it dead wrong.
Posted by Unknown at Tuesday, March 08, 2016