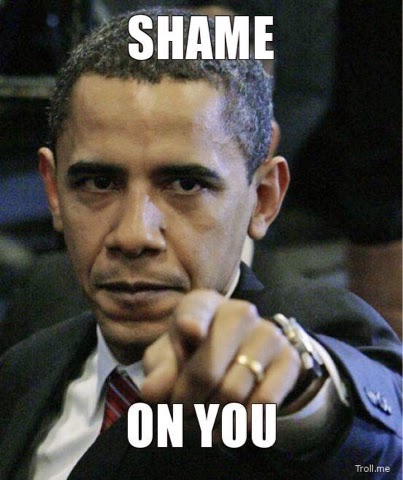 Perhaps one of the hottest topics in social media right now is the concept of shame, and in particular public shaming.


Following the publication of Jon Ronson’s excellent book, So You’ve Been Publicly Shamed, there has been a lot of discussion of the way social media (in particular Facebook and Twitter) can be used as a weapon against those that we dislike, disagree with, and ultimately wish to silence.


In addition to this, the lack of nuance enforced on us by Twitter's 140 character limit forces us to pile into intense ethical debates on Big Questions (sexism, racism, feminism and social justice) with too strict a construct. How can this be a step forward from Aristotle and Socrates?


The problem is this: the concept of shame itself is such a personal one, and we all carry it to a certain degree throughout our lives. None of us are perfect, and this leaves you with many problems when you move into the online world, and start to engage.


On social media, everything is geared towards everybody being perfect and right. The parts that we would not like known about ourselves stay hidden.


That we can sometimes be rude to parking attendants and waiting staff. That we can be unkind to others at times.


We need to present this norm, because it’s so important to us to be seen as a positive personal brand in our online lives, as flows offline, and into people’s minds, forming a perception of us.


But let’s face it. What we type into our devices, a lot like telling the bare-bones story of evolution, is only the surface of what we are.


So there are great gains to be had in shame, and in shaming others, especially when you are engaged in an argument online.


Once someone is shamed by doing something in our minds that we deem to be wrong, it is assumed by crowd consensus that it is okay to wreck this person’s life. It is also assumed fair that they should be tarnished with it forever. That’s my view on how many people see these shaming bouts.


The cases of Jonah Lehrer, Lynsey Stone and Justine Sacco stand out when discussing this. Shame has become toxic online. I'm conflicted about it's use.


For someone to be shamed, and to remain shamed in perpetuity, for individual acts as Sacco, Lehrer, and now Britt McHenry, when they have committed no serious crime, is a troubling development.


Social media is now acting as a kind of kangaroo court, on both the sides of the political spectrum, to not only shame people for doing things that in their mind are rude, but to also attempt to shut down debate around touchy subjects. I've even seen parents shame their children online. There are fewer things less pleasant than seeing that.


As I was writing this, two examples sprung to mind.


Firstly, my partner works for a hotel in London that is owned by Arab businessmen. As is their right in this country, and in any free country, they would prefer not to handle alcohol or pork products in the business they own.


This caused outrage on social media (stoked up by stories in the Daily Mail, including an article by arch-moron Richard Littlejohn), as people (mostly to the far-right of the political spectrum) rushed to condemn the hotel for choosing what they wish to sell.


The fallout was hideous, and people were trying to shame the establishment online into changing its mind, by saying that choosing to not serve bacon and beer to people was tantamount to introducing Sharia Law to London. Queries were fielded from people who asked if gay people were still welcome in the hotel (they were, of course), and even if they hotel stated this clearly, it was still inferred that they did not.


This is the problem with social media at times - people can make unsubstantiated claims, and are under no immediate pressure to have to prove their assertions. It is nearly *always* assumed that the customer is always right. The customer of Twitter, Facebook, Google+, Tripadvisor or any message board.


We are often hear the David vs. Goliath analogy wheeled out when an individual takes on a brand on social media. And the automatic assumption is that the brand is always the bad guy. As always, the answer is a lot more nuanced than that. And yet the burden of proof is always on the brand - and it's much easier to call a brand a liar on Twitter than a person, isn't it?


This week, for example, when I was checking Facebook, I came across this post about a pub in Fulmer, and it's owner, who allegedly denied somebody a disabled parking space to allow a Ferrari driver to keep his car in sight from the beer garden. 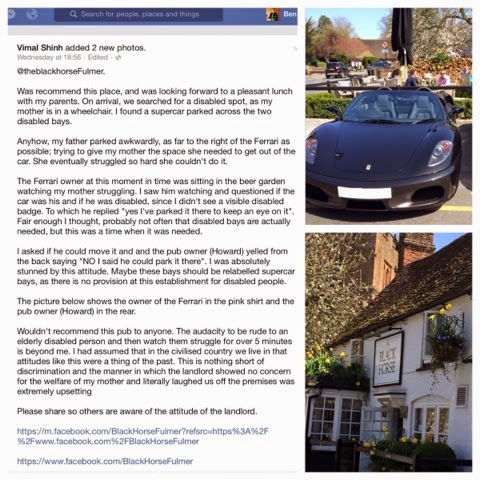 My initial gut response to this was disgust that a business and another person could treat somebody with a disability in this way. And then I clicked on the link. And I started to wonder: is the story true?


As far as I know, according to one side of the story, it is. But watching the pile-on in the comments section of people (mainly from the left of the political spectrum, for balance) using their guts before engaging their heads, of the threats of ruining somebodies business without first asking the pub in question if this did in fact happen, made me worried.


Do we really need so little evidence to start judging people online? Have we really fostered a platform where anybody at any time can set about either shaming an individual or a brand without anybody checking the provenance of the claims?


It's made me realise why we have laws. It's to protect us from the worst of the damage we inflict upon ourselves as a society.


But I wouldn't give that up. It would be bad for all of us. Which is why I think shaming on social media is bad for us as a society. An eye for an eye leaves the whole world blind, and with social media, often we are left fumbling in the darkness.

And one day, fumbling around in the darkness, we may end up making this Clickhole headline into a reality. 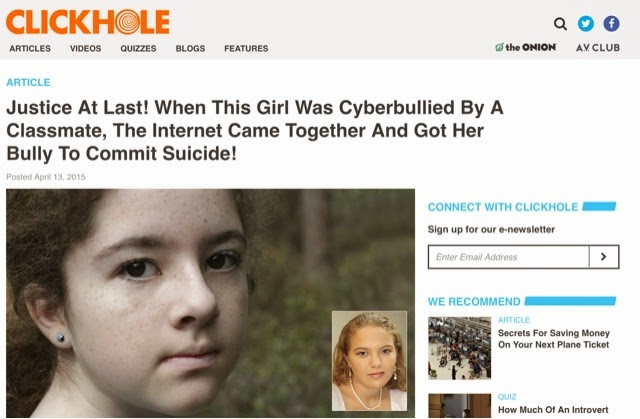 And that would be a reason for all us all to feel ashamed.
Posted by Unknown at Wednesday, April 22, 2015