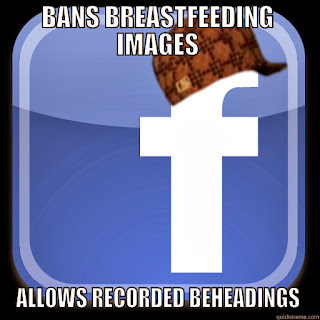 Last week Facebook relaxed their temporary ban on graphic images of violence on their site in quite some style - by allowing a video of a woman being beheaded by a masked man.


As part of our effort to combat the glorification of violence on Facebook, we are strengthening the enforcement of our policies.

First, when we review content that is reported to us, we will take a more holistic look at the context surrounding a violent image or video, and will remove content that celebrates violence.

Second, we will consider whether the person posting the content is sharing it responsibly, such as accompanying the video or image with a warning and sharing it with an age-appropriate audience.

In doing so, they re-sparked a debate that has been raging across the site for months. The positioning of Facebook as our self-appointed guide in the moral maze of life.

You see - I wouldn’t have a problem with this if they were consistent. The problem is that essentially, they’re doing such a cack-handed job of it.

Firstly - if you are looking to combat the glorification of violence, pornography and other on Facebook, taking an approach of zero-tolerance against most forms of nudity, however mild, needs to be reigned in. My nipple isn’t that offensive. The nipple of a woman feeding her child isn’t offensive. So why is there some kind of nipple-detection system on Facebook which monitors the sharing of these types of images?

As a rule of thumb, I’d rather not see any nipples on Facebook - but the decision to censor these images, yet look to take a more ‘holistic’ view on the circumstances around a beheading video being shared - just makes them look like they have slightly-askew policies - like one of those single-issue nutters you see on telly that want the Isle of Wight to become a principality. As long as there are no nipples, Facebook’s cool with pretty much anything. I’m not.

Secondly, breast-feeding isn’t wrong. And neither are nipples. But beheading somebody is.

We generally accept that murder is A Very Bad Thing.

We also accept that rape and abuse are uniformly Very Bad Things. Genital mutilation? Self-harm? Pro-anorexic content? I don’t need to see it to know that I think it’s wrong. What sort of moron would?

This is not about television, music, video games or movies. This is the real world. This is not a moral panic caused by Linda Lovelace, The Sex Pistols or Quentin Tarantino. This is a real, terrified person being beheaded on camera. And it’s fucking horrible. What sort of misery-tourist would want to watch that?

It’s a complex and nuanced argument - I accept that. These are just my thoughts, and as always, I could just be stood here pissing into the wind of indifference.

It’s a topic that we’ll probably be discussing until our alien overlords show up. But one thing I don’t buy is that Facebook can be an effective moral arbiter.

By now adding a warning to the videos, they're essentially saying that they're happy for eyeballs to remain on the violent real (not imaginary, not fictional) images they're hosting, without having to claim responsibility for their platform, or what people upload. And that's a massive dick move. 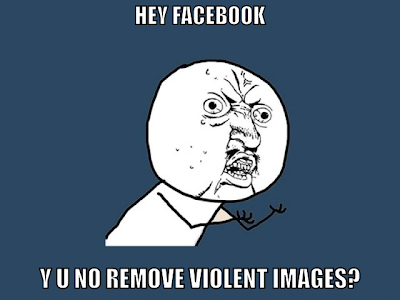