Stickers won't save you now 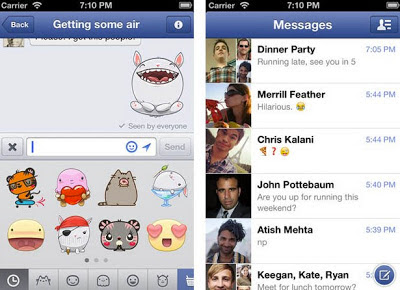 One of the funniest things about looking into the tech and social sphere from the outside (well, as a somebody that uses and manages on, rather than builds their services) is seeing the sort of mundane, everyday things they present as somehow revolutionary.

This week? It's Facebook and clip-art. You know, the images you send to your mates in an email conversation to try and sound less like you are machine-gunning words at them? Well, now with Facebook Messenger, you can attach a clip-art sticker to your message - meaning that you can now wink at people using a cat, rather than a smiley face, or lines.

This is a development right up there with Peter Frampton's talking guitar in terms of it's novelty-value. But no doubt, this is a way of introducing another 'revenue stream' into the Facebook experience, by inviting users to 'buy' more smiley packs.

But let's not get carried away with the hyperbole, as Engadget has, talking about the 'crippling visual limitations of emoticons in textual communications'.

Crippling? Crippling?! Come on. We've managed thus as a species thus far to get by not having an image of a winking (I said WINKING) pirate rabbit to send to our mate. Take off your Google Glass and apply a reality filter to what you're saying!

The worst thing about this re-heated idea? It's a re-heated idea stolen from another app - Path. You know, the one that steals contact information from it's users?

I've long suspected that the tech scene over in America (and by extension over here) have been engulfed and slightly deranged in it's own hubris, and believes that everything that it does, or every problem it 'solves', is life-changing.

Checking in at a location is fun - it's not life-changing.

Sharing photos with your friends is nice - it's not life-changing.

Creating cartoon characters for kids that you can buy upgrades for? It's a bit craven (like most advertising aimed at kids) - it's not life-changing. It solves nothing!

Updating your status or sending a tweet is brilliant - but we're not solving world hunger or complex social injustices. We're just easing the daily grind for people fortunate enough to be born into the western world. Making things a bit easier. And that is valuable. Enabling frictionless communication is a wonderful thing, and it's what the internet I love is all about.

But let's not all drink from the same fountain and start thinking that adding stickers to an app is important or news-worthy in any way. They're only stickers!
Posted by Unknown at Tuesday, May 07, 2013