The Onion and The Oscars: Let's move on! 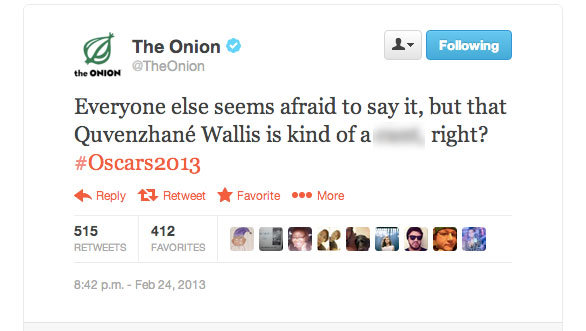 BANG! Imagine seeing that pop up in your news feed.

Now, this is a bit of a tough one to tackle, as I have to say that in my opinion, calling a nine-year-old girl a ‘c_nt’ just isn’t very funny. But since when has not being funny been classed as a crime? In the UK we’ve handed gold-plated careers to the likes of Bobby Davro, Keith Chegwin and Jason Manford off of the back of our love of traditional unfunny-ness.

Once again, to reiterate: The tweet, in my opinion, wasn't funny in the slighest.

But I think what we’re seeing here is an attempt by The Onion to prick the balloon of pomosity around The Oscars ceremony - alot like Seth McFarlane did whilst presenting it. They just picked the wrong target. An easy target. It was a cheap shot. And they were right to apologise to Quevenzhane Wallis.

But it wasn’t racist. And it wasn’t something that the whole of America, and the world at large, should get too worked up about.

I love Twitter. And I love social media. I love communicating. It’s my job. The ability that social media has to connect people around the world instantly and without borders is something to be applauded.

From 8am today, Syrian refugee Hasan will be taking over @oxfamgb's twitter page. Follow his tweets, for a day in his shoes #SyriaRefugees
— Oxfam International (@Oxfam) February 1, 2013


When charities like Oxfam hand over their Twitter account to a Syrian refugee for the day so you can find out what it’s like to live their lives from the comfort of your home or office - that’s powerful. You don’t get many people tweeting about it though, do you? What a great opportunity - a great real-time event.

Getting annoyed about a tasteless Oscars tweet isn’t a good use of your time on earth. It’s silly.

I think that the biggest mistake The Onion made in all this was to not pick their battles more carefully. In it’s quest to gain engagement, retweets and followers, it dived headfirst into a pit of angry vipers, just waiting for something minor (no pun intended) to get annoyed about. It was a shit joke that went down badly - but we’ve all heard much worse. So step away from the keyboard!

Here’s a thought: Maybe in the UK and the rest of the western world, we should concentrate on the real shit that’s going on - good and bad. Let’s get our priorities in proportion, and try and be a bit less knee-jerk. This Tweet will be forgotten next week, and we’ll move on to another outrage, but there are always more important things to be engaging with: our friends, family, loved ones, and the world around us.

The Oscars by comparison really isn’t that important. It’s chickenfeed for the mind, and trying to elevate this event within an event merely crystallises this. Move on.

The world as it appears on Twitter? That’s only 140 characters of it. That’s so far from the full skinny it’s untrue.
Posted by Unknown at Thursday, February 28, 2013