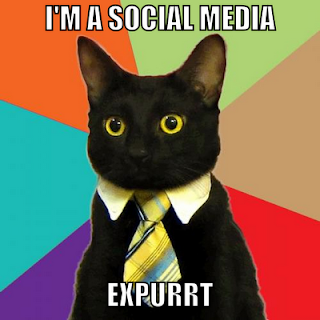 Thought I'd take a break from normal transmission to share this nugget of a job with you: 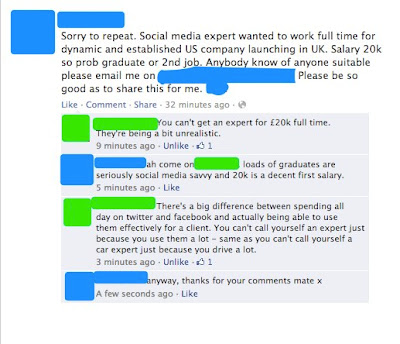 Sent to me by a mate, I opened it thinking I’d find another funny status update from Failbook, or an Oatmeal comic (which it seems I cannot escape any more, or have the option to hide from - a bit like Paddy McGuinness or a Nuclear war).

It was a post on somebody’s Facebook wall asking for somebody to refer a ‘social media expert’ to them.

When they were called out on it by another individual, he/she comes back with the feeble reply of ‘loads of grads are social media savvy’. Well yes, but you don’t come out of college or university as a ready made expert. I should know - I was a bit of a muppet by all accounts until around the age of 26.

My fear is that people actually think that it's fair to somehow snag a graduate fresh out of university, call them an expert, pile work on top of them that they may not be prepared or skilled for, and pay them a salary that for London is verging on scandalously low for a professional. I’ve lived on it there, in fact I moved up there in 2004 on a salary of £12k - shopping on £5 per week is not a fun experience, let me tell you.

The phrase ‘expert’ used in conjunction with social media is toxic to many people in our profession for a reason. Why?

I think Peter Shankman sums it up best:

Taking that logic and expanding upon it, I could vouch for my expertise in a number of key skills:

Things I am an expert in:

My point is this - yes, you could get a graduate, hire them in and call them a social media expert, but it’s the same as making a six year old a television producer because they watch a lot of it.

I wonder if this ‘dynamic and established American brand’ is aware that somebody acting on their behalf is suggesting getting a graduate or a ‘second jobber’ to fully handle the social media aspect of their launch in the UK? Handling the strategy, working with multiple departments, generating ideas, implementing them? Really?