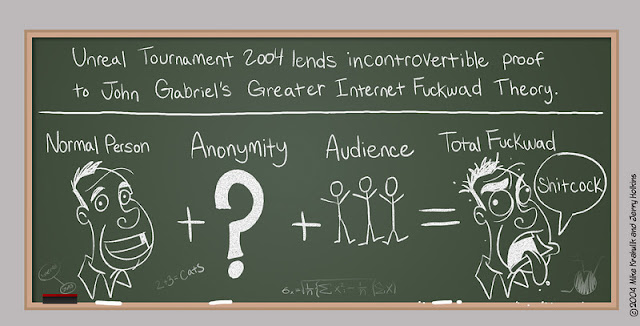 I’ve never been one of those people that sits in a rocking chair, lecturing people on their morals, spelling or language. It’s deeply hypocritical of me, and if I wanted to be a professional hypocrite I’d have got into politics.

What I will share with you, however, are my views on rudeness and impoliteness online. I read a fascinating article the other day on one of my favourite blogs - The Art of Manliness - that seemed to sum up how I felt on a deep level about some of the posts, and things that I see on the internet, and the world around us in general.

In the article, titled Being a Gentleman in the Age of the Internet, Brett and Kate McKay set out a list of tips on how to behave appropriately and respectfully online. I’m not going to dwell on gentlemanliness, as I think it’s a responsibility that we all bear. In an age where bullying stretches beyond the school gates and into our places of work - even onto our social media sites and smart phones, I think that we all have more of a duty than ever to engage in a civil way online.

Let me get one thing clear. This is not me talking about how posting anonymously on the internet is a damaging, frightening trend that’s going to bring about the downfall of our society. It’s simply not true. Regardless of your political or ideological beliefs, anonymity on the internet has about more as many changes to governments, foreign policy, groups and individuals than any other medium I know since the printing press.

But let’s be clear here: whilst it’s very noble and V for Vendetta-esque to stand up for a cause you believe in online to bring about change, and improve the world, it shouldn’t be used as a boulder to hide behind whilst you sling insults and abuse at another person online. Because, ultimately, that’s what we all are.

I love this video - I feel it sums up the phenomenon perfectly:

As you can see, the outburst online in the video ruins somebody’s whole day. The person on the other end of it? Well, they got their stuff a couple of days later. Who’s the bad guy here? To my mind, certainly not the service provider.

We are in the middle (I think we always have been) of a great technological leap forward. And whilst it is in my opinion churlish not to embrace change, and the way that we communicate, from language, punctiation and grammar to preconcieved notions of what friendship and following really means in the social media sphere, it’s equally important that we keep talking to each other. Addressing each other. Listening to each other, rather than simply just broadcasting and shouting people down for being different to yourselves, too normal, not normal enough to you or just because you’re having a shitty day.

I know that life can be a savage, unkind place. I know we can all behave badly at times (I know I have). We have all been an arsehole at some point in our lives, and if you think you haven’t, you’re probably either wrong or, well, you just don’t exist.

In this brave digital frontier we are creating, surely rather than mimmicking the occasional cruelty and aggression of the world outside your window, we should try to be the best representation of ourselves online, rather than just being a rude arsehat. All of us. Together. What do you think?
Posted by Unknown at Friday, July 27, 2012