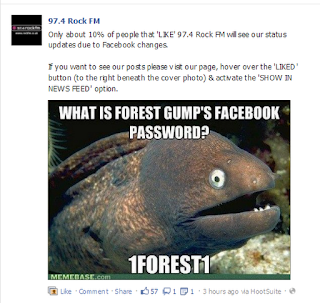 I’ve seen the above 'only about 10% of people that 'like' a fan page will see the status updates' post a lot over the past couple of weeks. Or months. In fact, ever since Facebook relaunched timeline. And it's gone viral...

Where does it come from? I don’t know - like most memes the origin of it is unknown. But it is a load of old shit. 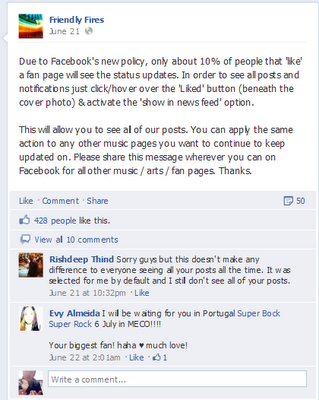 Facebook have been limiting the amount of posts that we have been seeing - but they've actually been doing it for a very long time. It’s called Edgerank, and it’s actually quite a good idea. Their thinking behind Edgerank is that yes, people want updates in their newsfeed, but they don’t want every single update, from all 350 of their friends, and the 600 brands they follow. Some posts are more important than others.

So the posts are broken down into affinity, weight, and time decay. 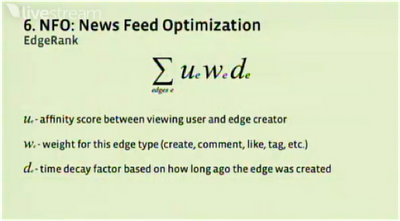 So how much you’ve got in common with a brand or person, how popular it already is, and how recently it was posted. Pretty simple, and pretty necessary. How annoyed would you be if a status update from Netflix pushed some good news a friend had to share out of your newsfeed?

A lot of the moaning seems to come from the fact that brands online are getting a bit bent out of shape at the fact that their inane status updates aren’t reaching enough people.

It’s childish - the equivalent of a company chucking a tantrum because their brand isn’t automatically number one in the Google search rankings.

You want to have loads of people see your posts? Then pay for it in the form of an advert, sponsored story or pay for a promoted post to reach your whole audience - people who have their own lives and own things to be getting on with. Do you really think that Facebook would let you bypass Edgerank and their own revenue-generating system by clicking a ‘Show in newsfeed’ option in a menu? That would just be stoopid. Don’t be stoopid.

You want to get into people’s news feed? Then post relevant content. Make your content interesting. Sadly, your links alone are not enough. People are on Facebook - it’s their fun time. Their ‘me time’.

In may ways, Edgerank can help your brand. In times gone by, if you posted something, it would probably barely reach 10% of your audience at a time. If ten people or brands posted after you, regardless of the content you shared, your post would be bumped from the news feed. Now your post can get traction in your audiences news feed if it's relevant to them, or is popular and posted at the right time. It's about quality as much as it is about timing now, to make sure that your posts are GOOD.

So if your content isn’t connecting with a wide audience, it’s not because Facebook are trying to put you out of business on the network - it’s because your content isn’t good enough. Take a hint - improve it.
Posted by Unknown at Thursday, July 12, 2012