Here is an example of how not to use social media if you are a brand...

At the moment, we are 'doing up' our house, so to speak (read more about that here), and we are buying a metric tonne of homeware, paint and furniture. It's expensive, but ultimately worth it, as spending a bit of money on your house shows that you actually give a shit about yourself. We don't own too much, but the stuff we do own, we like to be nice.

One of the biggest purchases we have made over the past few weeks was this delightful sofa...

We got it from Made.com, and Ana (like the amazing home improvement geek that she is) wrote a blog post about what a great find it was.

The delivery date was an estimated thirteen weeks, which is a bit long, but with Made you pay for the fact that you get nice products directly from the designers, and you don't have to go to DFS and get hassled by a man with a fat tie, white socks and too much hair gel.

So we were prepared to wait. And wait we did. Ana kept on checking the due date on the Made.com site, and saw that, as of Wednesday (February 1st), the sofa was still running to an estimated delivery time - which you'd think would have at least been confirmed by then.

So Ana decided to get in contact. And that's where I feel it's fitting to hand over to her, in an excerpt from her blog post:

So we ordered the bloody sofa and were told that we had an estimated delivery date of the 21st of February. Fine, no probs, we new it would take a while as like they say on their site, items are made to customer demand. Come the end of January I checked the delivery date again. Still estimated. I tried to click through to the so called Real Time Tracking System they have in place for 'every step of the way', and it just took me back to their website. Ok, again no probs, I'll just ask them when they are able to confirm the delivery date so I know when this sofa is going to be: in my house for sure/ I can make sure I work from home/ we can move the current sofa we have.

So I took to their fairly active Twitter account and asked them. (*As note here I just want to add that made.com don't have a phone number).

"@madedotcom Hi! I have an estimated delivery date for my sofa, I was wondering when this will be confirmed? It's currently estimated for the 21st Feb, so will I hear closer to the time? Thanks."

Ok, well that's a bit annoying as surely at least try to answer my query, but whatever, I'll email you.

So I emailed the same question, both from my email account and via their online contact form. I waited. I waited until closing time (5pm) and nothing. So I waited again this morning, surely they would be checking their customer emails first thing and drop me a quick like just to reassure me that they are looking in to it? Nada.

Then I got pissed off.

I know that email and social channels have made us all (or maybe just me) more impatient with response times and I know that I am guilty of being frustrated when people don't get back to me straight away via email. But this is a business! They have £900 of my money! They should check their fucking emails! Not only that but I could see that they'd been active on their Twitter and Facebook channels, so someone was obviously there checking them. So I tried Twitter again asking if they could reply to my email. Completely ignored. I tried a few more times. Again nothing apart from a tweet promoting a new item of furniture. So I tried Facebook. I wrote on their wall, they deleted it! I wrote on their wall again. Deleted straight away!

And that's where I came into the story.

I tweeted about Made.com too, and promptly got a response, not from them, but another annoyed customer by the name of James Pollard, who sent me the following testimonial:

Back in November 2011, my wife and I ordered a sofa and a chair from Made.com. We’d been in our new house for about a month and had gotten tired of sitting on an office chair and a kick-stool to eat dinner off of an overturned cardboard box. After a LOT of trawling around online for something that looked stylish and affordable, we came across two items on Made that looked ideal. Obviously the 8-10 week turnaround time between ordering and delivery is a long wait, but we figured it’d be worth iteventually.

Somewhat unexpectedly then, my wife received an e-mail from Made just a week later, saying that the sofa we ordered would be delivered in the next couple of weeks. This was even better – we’d have something to sit on over Christmas! So we both took a half-day off work to ensure that we’d be around to take delivery of it; rather annoyingly, it turned up at exactly the same time that I left the house and she arrived, but I don’t hold that against Made.

However, within half an hour, I’d had a phone call from my wife: “The sofa’s trashed.” Trashed how? It had two tears along the top and back of the upholstery and on one corner the material was coming away from the frame. In addition to that, the four chrome-plated legs were battered beyond belief, each harbouring several dents and scratches. We immediately suspected that it had been a return that they’d had in their warehouse that matched our order. So my wife went onto Made’s website and used their in-page contact form (no e-mail addresses or phone numbers available) to voice her displeasure. This was at around 1pm that afternoon, but she didn’t get a reply until just after 5.30pm that day – presumably as the operator answering was just out of the door.

As expected, they asked for photos, which were sent over, but we knew wouldn’t be looked at until the next morning.

The next day, a reply comes through that offers a full refund and they’d come and pick the sofa up or we could keep it as it is and they’d give us a part refund or some Made.com vouchers. My wife was not impressed. Even if the sofa was pushed up against a wall or into a corner, the damage would be visible to anyone. We had to ask for a replacement to be sent in addition to this one being picked up. There was no immediate reply to that. In fact it was after a few days, my wife posted a question about her query on Made.com’s Facebook page; she thought someone would have to see that, as the page is obviously managed quite routinely, making mention as it does of all the press attention they get and the awards that are showered upon them. It was deleted within minutes.


Firstly, James and his wife have clearly been mucked around a lot by Made. I wouldn't have received this far-from-glowing review unless my girlfriend and I had Tweeted about it.

How, how HOW? In this day and age can a company honestly expect people to be satisfied with a customer service (and Twitter and Facebook are customer service channels, whether you like it or not) channel that doesn't include a way to directly contact them?

Contact forms on websites are seen by many as impersonal, and a they lack transparency. In this day and age, it's the internet equivalent of posting a letter  - you don't really have a clear idea of when, or if it's going to arrive at the final location.

With social media, not only have we reached a level of digital maturity now to expect the company to be on there, but they are also expected to go above and beyond.

Some people say that this is impatient, but it isn't. Look at it another way: say you went into a restaurant, and waited ages for your food to turn up. You want to find out why this is, so you call the waiter over. He ignores you. But that's ok, maybe he didn't hear you... He's busy making sure that the new customers are seated properly, and they can look through the wonderful-looking menu. So you approach the waiter, and try to ask him poitely where the food is. He looks you up and down, curls his lip, and puts his hand over your mouth. And then he walks away. Your food turns up eventually, but you vow never to return to the place.

That's the experience Ana, myself, and lots of other people have experienced from Made.com. Here are a few grabs from their Facebook wall/online showroom: 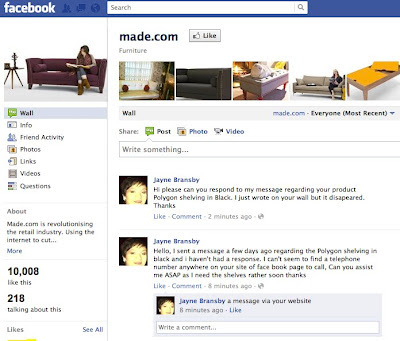 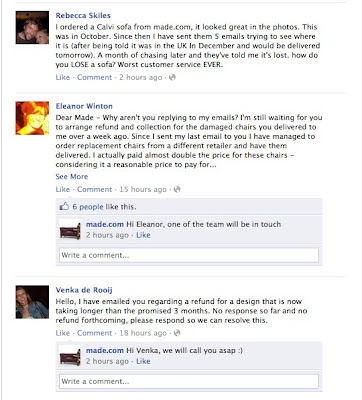 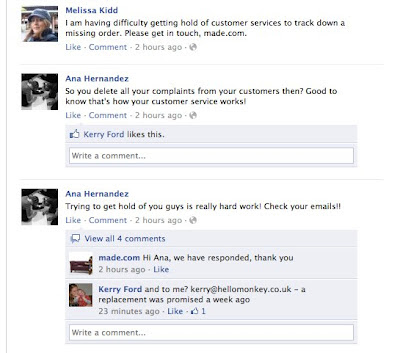 There you can see a load of responses to Made.com's rather slovenly customer services, along with responses from the Made that were clearly a panicked response to being caught deleting posts.

Let me get this clear: if you delete posts on Facebook, you are not deleting the problem. In fact, you are creating an echo chamber for discontent.

If you care enough to find a brand on Facebook and Twitter to ask a question, you can be damn sure that you're going to want a reply when you find them. How would you feel if you weren't being listened to?

Fortunately, this story does have a happy-ish ending.

Ana was contacted by Justin from Made.com on Thursday, apologising for the issues relating to the delivery time of the sofa (which will now be arriving in mid-March), and made promises to have a phone-line installed in their office (which will be picked up 'WITHIN TWO RINGS!'), and have a dedicated customer support email address.

They have also apologised (in a way) on their Facebook page below: 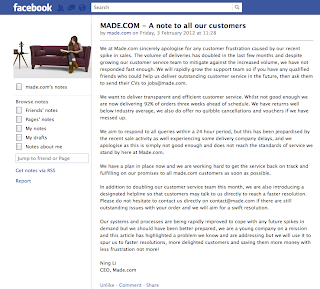 So all's well that ends well, we hope. I'll let you know when the sofa turns up, as I'm sure you're on the edge of your seat.

And I hope Made.com have learnt from the customer service snafu they made this week.

I'm sure some great people work there. But if you are a brand, and you're reading this blog, I only want you to take away one thing.

Social media is not a broadcast marketing channel to peddle your wares - it's a two-way communication channel, it's an echo chamber, and if you ignore somebody on there, it's like ignoring somebody in a crowded room - you may not want to hear the bad things said about you, but others will. So be prepared to act appropriately, and most importantly, LISTEN.