I think that quite a lot has been made of the frictionless sharing debate. A bit too much, in fact.

This article comes mostly from a Tweet, and the ensuing debate between Bobbie Johnson and Meg Pickard, two people I respect a great deal.


I'm not going to wade into what was a minor kerfuffle - but what I am going to say is that, broadly speaking, I'm with Meg on this one.

Frictionless sharing, whilst it may be annoying to some people, is very easy to filter out of your Facebook experience.

Your information is currency on Facebook, and they don't want to lose you. They have unveiled a whole host of options so you can not only 'turn down the volume' on friends that have certain apps installed (Spotify, Pinterest, The Guardian), you can also choose to read the terms and conditions of these apps and choose not to install them yourself.

Personally, I think that frictionless sharing, within reason, is great! I think you should have an option of what you share, and I still believe that even though you are travel within the realms of the open graph, you should still be able to traverse the web for content at will. I think the Guardian app on Facebook has been a fantastic success, when I click on a link, I'd like to still have the option to read and engage with the article as it was intended - on the site. 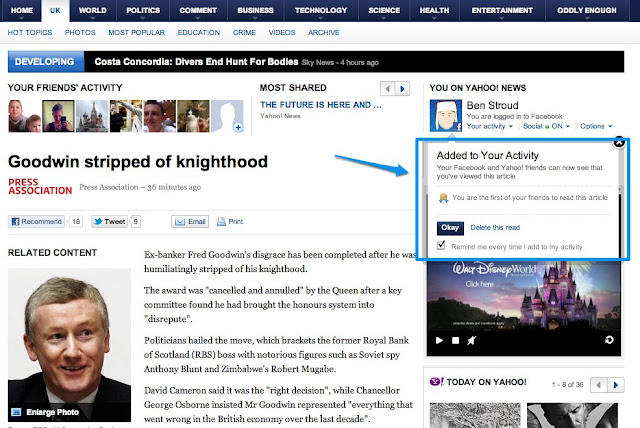 Is that pedantic? Am I missing the point?

Either way, I like sharing what I'm listening to on Spotify. I'm not embarrassed about listening to Hall & Oates and Toto as well as Pavement and The Smiths. I like the fact that I could be recommending a new band to somebody on Facebook whilst I'm listening to it. It's great!

Frictionless sharing is neither good nor bad - it's either your thing, or it isn't. You have a choice to be involved, and there's nothing arcane about it, unless you consent to give your details to a organ-farming app.