This week has been a crazy one if you are a sports fan. Sky Sports presenters Andy Gray and Richard Keys have been suspended (Gray has since been sacked) after making sexist comments about a female lineswoman Sian Massey at a Premier League game last weekend.


Sky were right to act in the way they were, but why has these videos surfaced at this time?


Well, it’s simple.
Rupert Murdoch, whose son James is chairman of BskyB knows the power of shrill liberal outrage (this is just a turn of phrase, I’m as liberal as they come). A great deal of liberal outrage can be found on Twitter. Support for Murdoch is low on social platforms, unless of course you are talking about Myspace, which to be honest, nobody is.
Controversial videos go viral very quickly. This video has been top of the Youtube trends all week, and has been going nuts on Twitter. 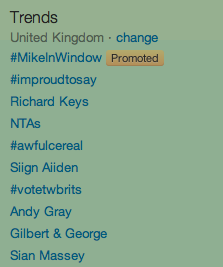 Misdirection away from the Andy Coulson/News of The World phone hacking saga was certainly needed by Rupert, as this was a new bête noir amongst the political, liberally-minded Twitterers tiring of Wikileaks conspiracy theories.
Andy Gray was taking legal action against a Murdoch-owned paper. His sexism was disgusting, and wrong, and yes, he should be punished for it. But let’s be honest here – is it any coincidence that this story has been leaked at this time, in the manner that it has?
Leaks make for great viral, social content. Somebody close to Rupert knows this. He knows it too. And he’s used it to deflect attention from a much, much bigger story.
He’s thrown a couple of sexists to the baying social media mob. And maybe before we tweet, or post to Facebook, we should take note of the where the information has come from. Sometimes, the seeding could be from a seedier place than you think, with an even seedier motive.


And speaking of seedy, we'll leave the final word to Andy, shall we?

(Update: Keys has now resigned too)
Posted by Unknown at Wednesday, January 26, 2011 No comments: Links to this post

So you think that super brands have it easy on social media? Well, think again.
Over the course of my sort online career, I’ve been lucky enough to monitor and look after a number of large and small brands on social media sites.
One thing that’s always surprised me is how blown away I get by people getting in contact with the brand I’m representing, uploading a picture, telling a story (but not in a wanky way of course). I love it, and I hope that never changes. If it does, I think it’ll be time for a new career.
To me, one of the biggest myths about social media is that bigger brands can just set up a page on Facebook, and immediately start to engage and start conversations that are good for their business, and good for their fans. That is just not true.
You have to work for it, because as much as you know that you should be on social media, your audience will still be slightly cynical of any branded content that you put out there. A page/account is just one of them. You have to become a friend. And how do you do that if you are just one person behind a massive brand?
When I was working at Ministry of Sound, one of the first big lightbulb moments for me was when I started asking questions on the Facebook page. People started to respond, and it was amazing. It still is.
You can have loads of great content on your site, which will feed through to your social platforms without any issues. But frankly, it will look pretty boring unless you actually ask them questions, show them cool stuff, and give them pictures.
Let’s say you have 300k people on your page, and you are 'just' a national company
Can you really have a coherent community of 300k people?
So a one-size-fits-all mentality doesn’t mesh well with for a large business. Especially if you have regional bases.
Why not diversify? Why not get smart with offering people info that is hyper-relevant to them? Why not have your work force dedicated to sharing great, useful information rather than just selling your brand?
Your brand will sell itself if you post useful, insightful content and apps.
Think Schweppes, and their useful harnessing of Facebook’s new profile layout hype… 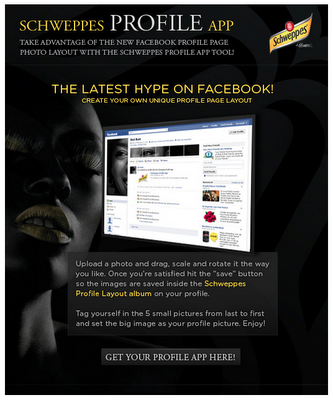 You'd be surprised what you get back...

What do you think?
Posted by Unknown at Thursday, January 20, 2011 No comments: Links to this post


I saw an article this week that made me quite angry. It effects me, it effects you, and frankly, I’m a little disgusted by it.

Apparently, Twitter power users and celebrities such as Snoop Dogg and Kim Kardashian charge brands and organisations to mention their products.

Although I am well aware that in these tight times people need to make a buck, frankly, I’m a bit sickened by this.

One day, when you’re in the bar with them, they take out a shiny new phone and start playing with it and showing it off. They tell you how much they like the phone, and love the features. The tariff is pretty competitive, and they know a way you can get it for a bit cheapr than people normally do. How helpful would that be? Very.

But what if your friend had a vested interest in promoting this phone? What if he’d been paid to promote it outside the pub by a man with a brown envelope from the phone company? How would that feel?

I can tell you how I'd feel – I'd feel cheated.

And that’s exactly what these celebrities are doing to their followers. The whole point of Twitter is to foster a more personal, instant, conversational relationship with your followers by telling them what you are up to, asking them what they are up to, and recommending great content.

By charging for tweets, these celebrities are selling out the whole social notion of what Twitter is about. You should share information about products, sites, cool stuff and blogs because you are a naturally social person. Not because somebody has just popped a few quid into your bank account.

It violates the bond of trust that is built up between users on social media. You are broadcasting to your network, and you are not being honest about your affiliations. It’s little different from payola in the music industry. And it needs to stop.

If I’m being advertised to, that’s FINE. I just want to know that I am. Don’t con me or tweet me like I’m some kind of idiot, and don’t create a secondary market out of your own reputation to circumvent traditional advertising channels.

It’s deceitful, and if you get caught, your fans will think you are an idiot. Once that respect has gone, it’s very hard to get it back.

What makes you popular on Twitter? Being useful. Being authentic. Being a pretty cool person.

Paying people for Twitter endorsements is sad. And I hope if you get caught, that the OFT nail you to the wall. #justsayin
Posted by Unknown at Thursday, January 13, 2011 No comments: Links to this post

No More Gurus - thanks!

It’s very nice when you inadvertently stumble upon a really spot-on community of people that share the some concerns about the industry that you work in.

So when I read this piece in New Media Age by columnist and ex-ASOS Community Manager Ilana Fox (now a partner at Spoke Digital), I felt that I had to get in touch. It really resonated with me, and I offered to write a blog for her website, No More Gurus.
Social Media Gurus are a blot on the tech/new media landscape, but having people like Ilana around setting up sites like No More Gurus really reaffirms my faith in the new media community, and their indefatigability in the face of so much, well, utter rubbish that some so-called ‘gurus’ spout.
Have a read of my blog piece below, and make sure you subscribe to the blog – they’ve got lots of great content.
Ben Stroud: Beware the blind trend-follower
Thanks Ilana, and thanks to everybody that knows me – it’s a real pleasure writing this blog, and the opportunities I get through it wouldn’t be possible unless I had such a loyal bunch of friends.
Posted by Unknown at Monday, January 10, 2011 No comments: Links to this post

How a video goes viral - by telling a great story 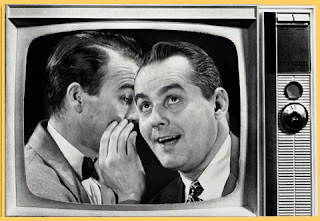 For quite some time, people have been asking what makes great, contagious viral content. A lot of companies assume that by chucking a ton of money and production value at a video, that the effort that they put into ‘seeding’ the content will pay dividends.

Well, let me tell you something – that’s just not true.
To show you how a video goes viral, I submit for your perusal the most recent example of a great viral video.

Why is this so significant? Well, the number one reason is that it is a great story.
Great stories are always the most enduring. From around the campfire, all the way to social media, bookmarking and mass media today, it is the single most important thing to consider when wanting to create compelling content, social or otherwise.
The journalist finds the homeless guy (Ted Williams). Williams will do a radio voice for loose change. He has an AMAZING VOICE. He’s had a hard time in the past with drugs and alcohol. He is discovered. 4.5 million Youtube views later, and the guy becomes a phenomenon!
This is a Hollywood story. It cheers us up. It has a happy ending, and it turns our assumptions on its head. We want to share it, through every avenue open to use (email, social, radio, television, the full works).
A great piece of social content is not about how much money you spend on it. It’s about the quality of your storytelling. Learning to write a good story is free, and the benefits are endless.
So don’t spend money. Spend a bit of time.

And if you want to read a bit more about Ted Williams, have a gander at this!
Posted by Unknown at Saturday, January 08, 2011 No comments: Links to this post